Teena bought some blade steak with yesterdays shopping.  I wanted to make a stir fry or stew of some kind, and after a bit of searching I found a recipe for Beef Goulash at Simply Recipes.  It sounded nice but I didn't have the exact ingredients, so I had to modify it a little.  I also changed the quantities as the original recipe served 4-6, and there's only 2 of us.

Heat the olive oil in a large pan, cook the onions and sugar over a low heat until caramelized (this could take up to 30 mins!).  Add the garlic and cumin and cook, stirring for one minute.  Add the paprika, marjoram and basil, stir through for another minute.

Add the tomato paste, vinegar and stock.  Stir well, then add pieces of steak and season with salt and pepper.  Bring to the boil, then reduce heat to a simmer.  Cover and cook until meat is very tender, about 1 hour or longer if possible (I had a hungry woman to feed, so could not wait that long!).  Stir occasionally, and once the meat is tender, taste and season with salt and pepper if required. 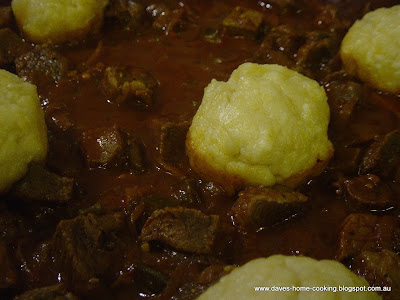 For the dumplings, combine the flour, baking powder and salt in a large bowl.  Melt the butter in a small bowl, then add milk and stir lightly.  Add to flour mixture and stir until combined, add a little extra milk if it's too dry.  After the stew has cooked, drop small handfuls of the dumpling mixture into the stew (just let them sit on top).  Cover and cook for 15 minutes.  Do not remove the cover until the 15 minutes are up or the steam will escape.  After 15 minutes, test the dumplings with a toothpick or skewer.  If it comes out clean the dumplings are done. 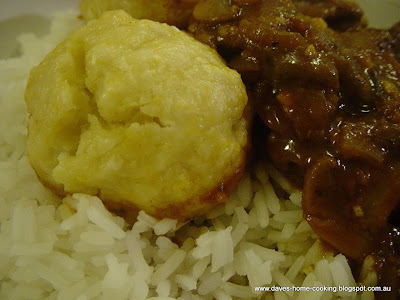 I've made dumplings for other dishes, but they usually have some herbs mixed through the dumpling mixture.  This sauce is nice and spicy though, so the plain dumplings were nice as they were.  Teena loves these dumplings, so I usually make them whenever I have a dish like this with lots of sauce.  The Goulash turned out well too, not a true Goulash perhaps with the missing ingredients, but it tasted great all the same.  We served it on a bed of white rice.  I think I'll be making this one again!
Posted by Unknown at 7:35 AM

Hi, welcome to my blog where you'll find lots of delicious home made recipes. All the recipes here have been made by me and tested by my lovely wife Teena and son Thomas.

Feel free to leave comments and visit Teena's blog Flushed with Rosy Colour if you're interested in crochet, gardening, homemade cards and lots of other stuff.